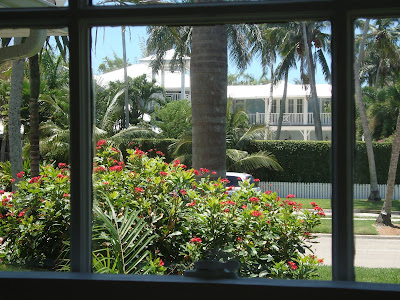 A clear, sunny day after in Naples...

Another mentor of mine, from my days at Art Institute of Atlanta, whom I am so very thankful for, is Stan Topol. Stan was the chairman of the interior design department at AIA when I showed up, age 17, ready to take over the design world...he was sitting in his Billy Baldwin brown office, with framed photographs on the walls of Joseph Braswell and Billy B.
I had never met such a charismatic, exotic personality ! Stan exudes atmosphere, went to school in New Orleans, and hails from the Mississippi Delta. I learned so much from him, not just about how to design a very high-style interior, but how to live, write a charming letter, dress, table manners, knowledge of french language, food, and all the things that make life worth living. Today, Stan is considered to be one of the top designers in the U.S. and has been featured in "AD" and has designed extensively for Sir Elton John. He also has done major work here in Naples for one of the founding families, the Lutgerts. I would go so far as to say that not only has he mentored me, and many others, but that the day we met was the official beginning of my career as a decorator ! DF ***** www.stantopol.com/
copyright Dean Farris 2009
Posted by Dean Farris at 8:11 AM