The fabulous, super decorator, Thomas Britt, is having some things auctioned off by Kaminski...click here for more information and to browse the lots.  Enjoy!  DF *****
Posted by Dean Farris at 6:18 AM

This image resonated with me~ while perusing the design site Cote de Texas, by Joni Webb.  What a statement one fig tree can make!  The late designer from San Francisco, Michael Taylor, was known for using trees in this manner.  Here, the founder of Ballard Designs, Helen Ballard Weeks, used a tree in her (former) entrance hall in Atlanta as a piece of dramatic sculpture.  I love this.  Enjoy!  DF *****

A native of California, Michael studied interior design at Otis College of Art and Design in Los Angeles.  In 1984, he continued his studies at The Victoria and Albert Museum in London, then returned to the U.S. to work under the tutelage of legendary antiques dealer Gep Durenberger.  Next he moved to New York in an association with noted designer John Saladino.  After three years, he was back in California to open a home furnishings store. His design firm, Michael S Smith Inc, was launched in 1990, expanding from projects solely for private clients to his Jasper line of fine furniture and fabrics sold exclusively in multi-line showrooms around the world.

Another of the interior designers who inspire me, is Michael Smith.  I admire him for not only his work, but the way he's designed his life.  While others merely dream of decorating the White House private quarters, Michael and his firm have done it.

When Billy and I were out in California, we visited the San Juan Capistrano shop of the esteemed dealer, Gep Durenberger.  While Gep had since left California, to return to his roots,  we were able to soak up the essence of his style and taste.  I was mesmerized, since my department chairman, FIT, Stanley Barrows, always had such good things to say about Gep.  Michael worked for Gep!  He also worked for Saladino, and I still vividly recall the dramatic elegance of the Saladino offices in New York, which were actually above the Parish-Hadley offices! 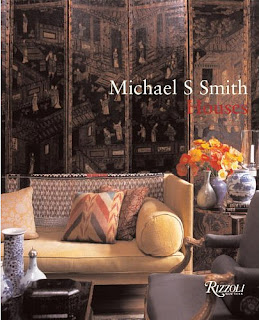 Cielito Lindo: translation- "A little piece of heaven" ~ Mrs. Woolworth lived there in the season in 124 rooms from the late 20's through the late forties... read more on PB Daily News... DF *****
Posted by Dean Farris at 12:17 PM

The designer Tory Burch inspired me to recall my time at Bergdorf Goodman, when beautiful, famous people like Iman, would come in to shop and to browse.

I was, like everyone else, saddened to hear of the loss of David Bowie at the young age of 69, and while I never saw him perform, he was a huge influence on me and my friends back in the late 1970's.

I can't even begin to imagine anyone more beautiful, graceful, or elegant than Iman.  The staff at BG was pretty much numb to seeing celebrities and selling to them, so we really never fawned over them.  We just tried to treat them like anyone else.  DB r.i.p.  DF *****

This past Summer, Billy and I found ourselves in the great city of New York, and I snapped this amazing, huge, antique Baccarat chandelier...do you think anything could be more impressive, or beautiful?  Opulent and understated at the same time.  DF ***** (and check this out, the Baccarat Hotel, via Damsel in Dior) here !

In 1764 King Louis XV of France gave permission to found a glassworks in the town of Baccarat in the Lorraine region in eastern France to Prince Bishop Cardinal Louis-Joseph de Laval-Montmorency (1710-1802). Production consisted of window panes, mirrors and stemware until 1816 when the first crystal oven went into operation. By that time over 3000 workers were employed at the site.[3]
Posted by Dean Farris at 7:20 AM


I seem to be meeting a LOT of lovely people from London lately, and was reminded of my time living in the U.K., when I first visited the flagship store of Harvey Nichols, in trendy Knightsbridge.  I was mightily inspired by the fashion, the colours, and the styles...click here to see why !  DF *****

My very sweet and kind and talented friend, Julie Britt, sent this video to me to kick off 2016...funny too, that Jackie Rogers was at dinner with us the night we were in Watermill visiting Tom and Julie, as Jackie had modeled for Madame Coco in her younger days living abroad.  Fabulous!  DF *****