I was most fortunate to find this pair of rock crystal obelisk from Maitland Smith at the Miromar Design center just before they moved out of the building.  Classical in their point of view they lend a certain cachet to my living room setting here in Naples.  DF
Posted by Dean Farris at 6:01 AM


While I've shown this before I forgot to mention that the table came from Charleston, South Carolina-
I was doing a house south of Broad in Charleston years before BRAVO came out with "Southern charm" featuring the magnificent home of the Mario Buatta client Patricia Altschul.  My clients there gave me this table as a gift and whenever I look at it I think of them and all the fun we had remodeling and decorating their house on Saint Michaels alley behind St. Michael's Church.  DF
Posted by Dean Farris at 5:33 AM

What do you get when you add a Warhol print to sunflowers? Answer: you get fun!  When I was a teenager I used to haunt this fabulous shop called the shop of John Simmons it was a brilliant hippie chic mix of Fitz and Floyd dried flowers incense and all kinds of decorative furnishings it was in a word fabulous!  Like Deeda Blair I'm waiting until I can get a true 18th century signed French commode to put under my Warhol print until then I have this somewhat Kitsch wine table topped with a copy of a Chinese jar which I bought in a junk shop tres' chic a la babe Paley...! DF
Posted by Dean Farris at 5:36 PM

I am pretty much constantly rearranging my small living room here in sunny Naples on the gulf and here, I placed the small settee on an angle just to change out the room a bit since it's a boring rectangular box with a low ceiling height.  I also ganged up the two Empire style pieces in front of the sofa which broadens the length of the room a bit and gives me more space to display my precious books and Objet' -  In the image below which I found on the enchanted home I am using this example for a current decorating job to show porcelain on brackets which is something else I'm very fond of and use quite frequently.  Enjoy! DF 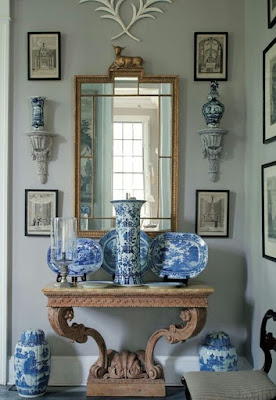 As you should probably know by now "Maximalism" in decorating as well as fashion is making a big comeback -for some of us it never left in the first place -we were just waiting!

I'm pretty sure this image is from the book called Horst  interiors and I found it very interesting because of the pale green wall color the gilt over mantel, Louis XV mantel and the furniture as well with a non-formula color scheme.

This is the look and atmosphere of lived in Grandeur, something I was exposed to when I studied at the American museum in Britain outside bath Avon back in the late 70s early 80s- As a very young man living abroad in the Royal Crescent Hotel I was exposed to the British aristocratic way of living including Lord Fry and his unbelievably elegant townhouse in the Royal Crescent to which he had downsized from the manor house in the countryside- (Widcombe Manor)  it was through Jeremy Fry that I was introduced to Lord Snowdon who was then the estranged husband of princess Margaret someone you may have heard about-!

There's definitely something to be said for family heirlooms or attending auctions and going to beautiful shops and finding incredibly beautiful old pieces which are sometimes called antiques.  I certainly did have a lot of fun shopping for antiques in Manhattan back in the 1980s where I was often driven to the shops in a chauffeur driven Rolls-Royce or a chauffeur driven Mercedes-Benz limousine sometimes with the client and sometimes not.  Amusingly being only in my 20s I would quite often stop in front of an 18th-century mirror and stare at it and think who is that incredibly good looking young man looking back at me? LOL!  DF
Posted by Dean Farris at 12:41 PM


One of the most charming spaces at the Twenty20 kips Bay show house was
the small cabana off the garden which designer Joe Lucas dubbed the palmetto snug.  I especially liked the small vintage sofa angled in the corner which was reupholstered for the show house and behind it was a stunning arrangement of yellow forsythia  mixed with some dried materials not shown in this image.  @lucasstudioinc   Show house is open now through March 1st.  DF


I find this really very inspiring and it's classic somewhat old fashioned point of view with the beautiful details which Leta Foster is known for.  Having followed her work for many years she's always been one of my favorite decorators in the Palm Beach New York axis- And I'm quite proud to relate the story of how she once sought to recruit me straight out of design school back in the 1980s-
I assume she called Stanley Barrows my department chair and asked him who he would recommend and he probably gave her my name-!  If you happen to be in Palm Beach this winter pop in to the kips Bay decorator show house- Leta designed an interesting library with a custom zebra wallpaper, she also has a beautiful boutique in via Mizner off Worth Avenue that's definitely worth a visit- DF


So, I'm specifying this beautiful printed grass cloth from Schumacher for the den of an old friend here in Naples I know she'll love it when it's installed!  DF
Posted by Dean Farris at 8:46 AM

It was fun to visit the latest Showhouse however I was disappointed to not have time to visit some dear friends as we were only in PB for the day-
The house was gorgeous and I especially liked the garden- Enjoy!  DF 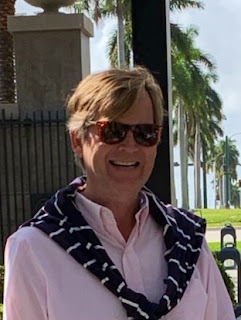