That Drawing Room I Met Kevin In... 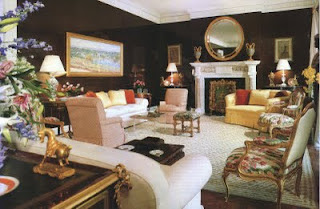 The late, great KEVIN MCNAMARA, who, like Albert Hadley, worked for both McMillen and with Sister Parish, was one of the most brilliant of the decorators I was fortunate to know when I lived in the city. I met Kevin at the Kips Bay Showhouse, when he was lighting Rigaud candles in his room, a stunning black lacquered affair, with the highest possible point of view, as far as classical taste in design goes. Louise Cronan worked for Kevin, and Christopher Norman was his partner. Many people in the New York design world of the 1980's admired Mr. McNamara's taste and style, and his office and apartment were located in chic black painted rowhouses at the river end of east 72nd Street in Manhattan. Kevin was a major talent, and later he retired to Rancho Mirage, California. More on Kevin later! DF ******
Posted by Dean Farris at 6:30 PM