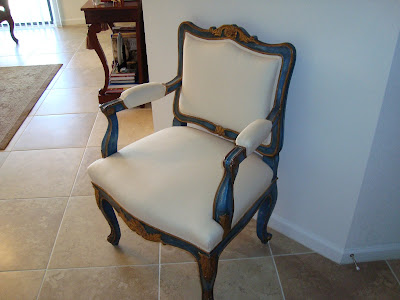 About eight years ago, I had the extreme pleasure of getting to know the iconic designer Albert Hadley better, when he owned a 1920's cottage here in Naples. Imagine my keen pleasure and surprise at discovering that Albert had bought a place here as a winter retreat. We had the most wonderful evenings discussing decoration and design over cocktails and dinner. I did meet two of his New York associates, Mark Sciarillo and James Andrew, as well as his local contractor, Johnny Harris. It was a great time in my life, and one that I thoroughly enjoyed, having known Albert from my days living in New York. I also was able to introduce him to clients of mine, who had a larger cottage on the same street, who ended up buying his cottage when he decided to sell. His house was featured in House Beautiful. It was all done in white, gray, and yellow. I loved it, and it had a small guest house as well. Here is a picture of a Spanish Louis XV style chair I spied in the guest house, and was able to obtain from Albert for a reasonable sum. The fabric is Jack Larsen linen with a gold lame' backing which shimmers ever so slightly. I flipped when I realized that I owned this piece, and Albert was so kind and also gave me a lacquered parsons table he once had in his Living Room in New York. I cherish Albert as a mentor and a friend. He is truly an icon and a living legend in our world, just as Julia Child was to Julie !
Posted by Dean Farris at 6:19 AM