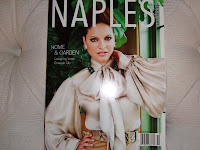 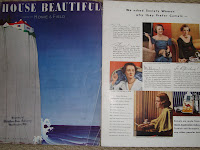 Here is another issue of "House Beautiful" from 1935. I was looking at the ad for the Camel cigarettes, and noticed that the company who makes them, R. J. Reynolds, was listed in very fine print, of Winston-Salem, N.C., my home town. In the 1980's Kohlberg Kravis executed the largest LBO in history, acquiring RJR/Nabisco for 25 billion dollars ! Needless to say, after that there were some very happy campers in Winston-Salem. (The cigarettes were named AFTER the towns, not the other way around). I grew up in deep middle class comfort, and living in the Piedmont, with its lush trees and rolling hills, often fantasized that I was really in Los Angeles. Compare this 1935 cover with the 2009 "Naples Illustrated" cover... am proud to say I have an ad of my own in this very issue, for Dean Farris Interior Design. As my friend James Andrew would say, "The better it gets, the better it gets !" DF *****
Posted by Dean Farris at 5:36 AM