Part of my 15 minutes of fame was riding in a taxi in Manhattan with the late designer, Jed Johnson  as my friends Arthur Dunnam and Scott Lalley were working for him- and I was working in adjacent offices for the late Raul Morillas, of Robert A. M. Stern Architects.  Serendipity brought beautiful and glamorous Jed and I together as we shared a cab uptown...sadly, he was killed in the TWA flight 800 crash off of Long Island in 1996- the same year I left NYC for Florida.. perusing the Victor Bockris bio of Andy Warhol recently, I realized that poor Jed was also with Andy when the artist was shot several times by the deranged Valerie Solanas.  What a horror that must have been.  May Jed and Andy rest in eternal peace.  DF 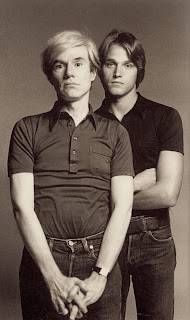