I designed this dining room for my parents about 30 years ago and they still have it.  It made the move from the big house to the Villa which they downsized to -and it looks great in the open floor plan which they now have.

The large table which has a round glass top has an octagonal Rattan base by McGuire and the top is a custom glass piece which we ordered from Carolina glass.  I ordered the chairs from Ainsworth Noah in Atlanta and had them upholstered in a beautiful Osborne and Little print which my mother was especially fond of -she's a big brown and beige person -but she likes a touch of color, so we painted the ceiling a pale blush which looked really nice with the chandelier which was sourced from King's chandelier in North Carolina.  I remember that she was very specific about the shade of blush that was applied to the ceiling.

The walls in the original dining room were strie' glazed in a fabulous bone color above and below the chair rail and that room had two windows which had champagne beige raw silk balloon shades on them. Very chic!  (The raw silk was lined and also embroidered with pale cream polka dots!)

The corner cupboard is a reproduction and is filled with pieces of my grandmothers beautiful China which is white with a pink and pale green floral border.  We also used her heirloom silver and glassware for major dinners such as Thanksgiving and Christmas.  My mother was and still is a fantastic southern cook, Although she rarely cooks now and I told her jokingly that she should rope off her kitchen and put "permanently closed" on it ha ha !  DF 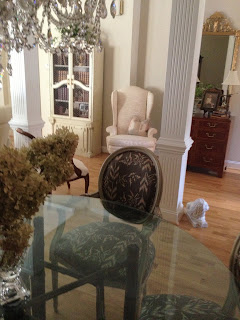