Here, in my own living room I've created a very Syrie Maugham inspired look.   Syrie Maugham was one of the most Influential decorators from the earlier part of the 20th century along with Elsie de Wolfe, whom she considered competition.  Known as an early promoter of the use of white and shades of off-white in decor, Syrie became Mrs. Maugham after her marriage to the famous writer, Somerset Maugham...by the way Acanthus Press has a book about her if you're interested.

Below, Look at these stunning Syrie Maugham tufted stools which scream chic and style from Christie's... The smart combination of black and bone white reminds me of the time Billy and I were in Palm Desert and popped into the shop of Phyllis Washington on El Paseo.  While there, I spotted the most charming pair of open arm chairs painted in bone white and upholstered in a black stamped alligator leather with nail head trim.  While I now own a similar pair of chairs I still dream of owning the chairs I saw at Phyllis's shop -there was something about them that just haunted me and that combination of black with white gets me every time.  DF 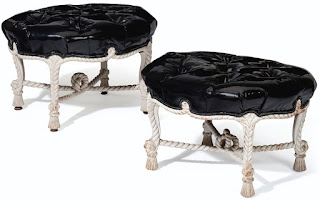