When a decorator loves a room that someone did by themselves you know it's a great room.  Take, for example this one by Mrs. Walter Farwell- who was a friend of Ruby Ross Wood- the mentor of Billy Baldwin.  Referring back to yesterday's post here again we see the use of Chinoiserie lacquer.

After showing this room to Billy, Ruby asked him what he thought of it and he said he thought 50 years from that time which was the 30's that it would still be current and I have to agree with him. And there's a striking simplicity and elegant restraint to the decor which I think he responded to very strongly. By the way this house is still standing and is now being used as a school.

In the below image we see Billy in his own lacquer box in a modern building in the east 60s in Manhattan prior to his retirement to Nantucket.  Billy Baldwin Studio, Inc. bought the rights to the BB collection from Luten Clary Stern - and continue to provide superior products to the trade- (see my earlier posts on Kips Bay Palm Beach where Louise Cronan used a Billy Baldwin Studio console in her loggia).

Billy lives on through the legacy of style
and taste he left behind!  DF 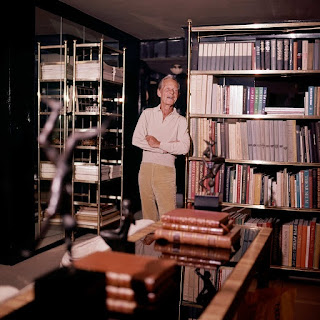