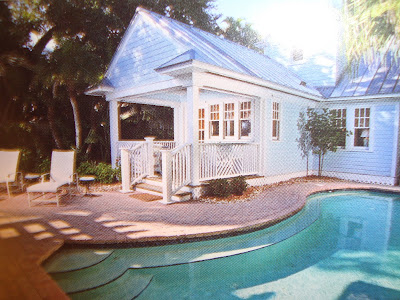 Our wonderful Albert Hadley owned this small cottage in Old Naples, and I spent a lot of time there when he wintered in Naples. When Albert had this house, it was painted a dark green, and did not have a swimming pool. I introduced Albert to my clients David and Tom, who later bought his house! (They downsized from a larger historic property on the same street, known as West Haven) David and Tom then sold it to Rick, a fashion executive, who did extensive remodeling as well, and the house recently sold again to buyers I don't know, for around 2 million...During Albert's tenure, the house was published in House Beautiful...it also has a small guest house as well. Some of my most vivid memories of fun with AH are from this time. I also met James Andrew there for the first time, as well as Mark Sciarillo, another associate of the famed Mr Hadley. One night we all went to dinner at Tommy Bahamas, which is contained in a building adjacent to Mrs Tobin's building, which has stucco painted in colors selected by the late Mark Hampton. Naples is full of such tidbits of decorating trivia! Have a great day, XXOO Dean
Posted by Dean Farris at 4:45 AM