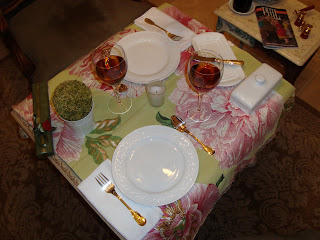 I thought it would be fun to show a "dinner a deux" table setting from my apartment in Naples, set for a light supper before catching Dame Edna at the Philharmonic in April. Dame Edna's real name is Barry Humphries, an Aussie of some repute in the theater world.
William and I enjoyed a medium Amontillado sherry, pate' campagna, tapenade, and a splash of Cabernet before heading out, served on my beautiful plates (Louvre pattern) from Limoges, and using the silver (Chinon), a pattern dating from the 19th century empire period, a favorite of the son of King Louis Philippe. The cloth draping the french '40's wine table is "Scaramouche" Lorca, made in France for Osborne & Little. DF*****
Posted by Dean Farris at 5:53 PM