So you might be wondering why I've been showing this mirror for the past 10 years at least -it's because it's a copy of one by the very well regarded French artisan Line Vautrin... The one shown above sold last year, it's auction estimate was 35 - 45,000 euro!  (My copy from Wisteria was substantially less) ...

Line Vautrin
COLBERT MIRROR
circa 1960
talosel and mirrored glass
Signed Line Vautrin and with the ROI stamp on the reverse
Diameter : 63 cm ; 24 3/4 in.
READ CONDITION REPORT

In the image below, (my own living room) I've also referenced French decorator, Madeleine Castaing ( see definitive book on Madame C by Emily Evans Eerdmans) - and the Christopher Flach documentary about her life on YouTube -  in the use of the leopard velvet pillows.  (Also a very Regency motif) - the use of Billy Baldwin slipper chairs in RobertAllen toile, with copies of Hansen swing arm lamps, anotherBaldwin signature.  Small kidney pillow in classic Stroheim cut velvet squares, a fave of his as well, notice too the sheepskin rugs and silk sash
Hanger a la English master decorator, John Fowler - and the painted empire Tabouret used as a table which Tom Britt loves - a nod to Henri Samuel... 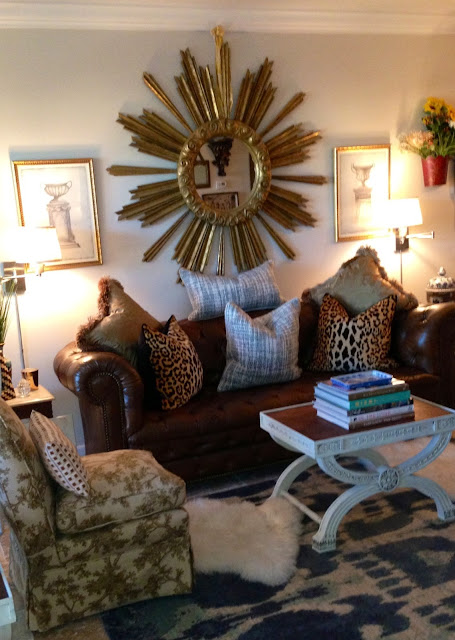