Who wouldn't find her inspiring, smart, fun and a beauty?
Posted by Dean Farris at 5:47 AM

Enjoy this Quintessence video- always a source of inspiration!  DFID *****
Posted by Dean Farris at 10:20 PM

Food for thought...visual inspiration- past and present! DF 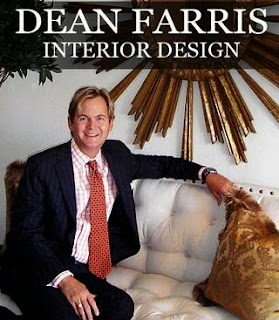 I'm very excited to see the new Jennifer Boles book , "Inspired Design, The 100 Most Important Interior Designers of the Past 100 Years" due out in October- by Vendome Press.  Congratulations to Jennifer!


Looking forward to dinner tonite, with William (Billy) at fabulous and fun The French !  Bon Appetit !


Enjoy these "cool" images...via my portfolio and Habitually Chic!

PROGRESS: Blue and White on Bellflower


Making fabulous progress on this Naples project- one of my favorite clients and favorite houses- a refresh- in the family quarters, from greens and yellows to blues, whites against a butter yellow background...

INSPIRED BY: My Many Brilliant Interior Design Mentors


Over the past forty plus years, I've been most fortunate to have known and been mentored by some of the finest and most talented decorators and designers in the business.

Having been selected to study at the Art Institute of Atlanta, under chairman, Stan Topol , and then later the Fashion Institute of Technology, under chairman, Stanley Barrows  - as well as study abroad in Bath, U.K. at the American Museum in Britain, during the reign of Ian McCallum  - I was exposed to the very best taste and taught a very thorough history of art and design as well as architecture.

In the above image, of my own flat in Naples, Florida , you can see the influence of masters I've known throughout my career, including Mario Buatta, Albert Hadley, Tom Britt, and many others.  Every single day, I think about them and all that I've learned from them as well as the fabulous schools where I studied interior design and art history.

This assemblage is very personal, and includes many furnishings and objects that were given to me over the years.  Slipper chairs, Louis XIV style arm chairs, a chesterfield sofa, a rattan side table, and many other items remind me of dear friends and fond memories.


In the close up of my "collector's table" (above) you can see lamps and blue and white pieces which were gifts from Billy, and a large dragon bowl I purchased from him when he was with Maison Auclair- and a small collection of decorative sea shells too.  In case you think I'm oblivious to minimalism, click here to see a client progress shot...!

Have a great and memorable Fourth of July! DF


I'm excited to get to travel back to the Carolinas next month, and to make another visit to a favorite haunt, The Pink Door, in Greensboro.

While enjoying the south Florida heat, I'll be planning my trip to North Carolina- always a treat, since my family is there.  Read more about The Pink Door here and enjoy!

The proprietor, Glenn Blair Lavinder, has a flair for using vintage pieces amidst architectural backgrounds.  Brilliant!  Follow along on Instagram !  I love the glamour of this shop and design studio!

DECORATION: Using Lilac as a Neutral

Sometimes, we become obsessed with a color, or the idea of a color...and for the last few years I've been thinking about lilac, and the beauty of it as a color for decoration, and to be used in a "neutral" way.  After all, it was none other than the late Albert Livingston Hadley, who was quoted as saying that "lavender was the beige of the nineties" - (see my 2016 post on this topic here ) - something that's stuck in my brain and I can't stop thinking about- perhaps as it is so similar to what Diana Vreeland had famously said about "pink being the navy blue of India".  The Salonniere also posted about this lavender-lilac topic!  And, check out what Alex Papachristidis has to say on this topic (video) here !

Very suitably - this small parsons table had belonged to Albert- and he gave it to me before he almost threw it in the trash-!  When I got it, it was in a gold lacquer- and I could see that underneath it had once been a deep rich Parish-Hadley shade of peacock blue.  I had left it in my garage for awhile, thinking nothing of it- and then one day I slapped some black paint on it with a brush- very brushy- and lived with that for a number of years.  Below, you can see where I had piled it up with books and magazines- since I had grown tired of the bad job I had done of painting it myself- and it was very functional for drinks and even a "tv" dinner!  If you've been following me on this blog, you know by now that I am constantly rearranging my furniture and objects.  It never ends!

I sometimes think of this room as the transformation of a small, dark, box, into a fin de siècle salon of Proustian memories and nostalgia...or perhaps just a modern "man cave" !


Once I achieved the color selection, which took less than two minutes, (Benjamin Moore) since I already knew what I wanted- I got the bright idea to use the lilac color for a sort of improvised table, where I topped a baroque style table with an unfinished plywood door- so that I'd have a long dreamt of display area for my collection of mostly "junque" porcelains- with a few antique pieces mixed in- which was very exciting and fun to do on a rainy day here in Naples.  But, before I even bought the paint, Billy and I had gone into a place called Z Galerie and found these fun ikat pillows- on sale!  So, as you can see, one thing led to another- the pillows are fabulous, but take up too much room on my small scale chesterfield, so I moved them into my bedroom, which led to totally re-arranging that space!  The small inlaid screen panels were a gift from old friends, Bing and Martin.

I also made a designer sketch of how I was envisioning the table with the porcelains...

﻿﻿
( Concurrently, I was always planning to use this fabulous, classic, "bali hai" printed linen and cotton, what Isaac Mizrahi calls a "Watteau"print - from China Seas on a pair of Louis XV style open armchairs- the color and pattern of which I was mad for-  and so is Danielle Rollins! -the blue colorway)


Here's a shot of the table set up with the porcelain on top- as you can see from this image, the two chairs are screaming for the new fabric- which could be done as slip covers- since I still like the suede as a reminder of Gabrielle "Coco" Chanel and her Rue Cambon suite above the shop- I also want to add some fuchsia and green orchids to the table-

﻿﻿
Another option would be to make two toss pillows out of the China Seas fabric- which could then be also used on the leather chesterfield- which still needs a pair of classic swing arm lamps- flanking- also, since I took this shot, I've added some very decorative shells to the mix- (thank you Judith) which add some nice Floribbean flair- much needed as there is a white ceiling fan hanging just above this arrangement!

Thanks again to dear Linda of "Calling It Home" for the gift of the vintage lamps- very Dixie Highway-!  Here, (below image) I experimented with a Mongiardino-John Fowler inspired idea of "slipcovering" the lamp shades- not sure I love it or not- but a very charming and cozy effect!
This whole post is all done in the spirit of good, old fashioned, all American decorating- a byline from the old days of House and Garden, my favorite childhood magazine- but, seriously, I could have had the whole room re-painted in a deep aubergine gloss, or the deep chocolate brown I had in my New York flat- so this was a way to spruce up for late Spring and early Summer without too much fuss and the expense- always a good thing.  Sister Parish would agree, I'm sure, with this very New England approach﻿…
(I was also thinking of old houses in Southampton I had seen, with unusual color schemes- and the very beautiful, recently married Countess Tessa Grafin von Walderdorff, a source of endless inspiration and ethereal, youthful beauty.)  DF
* * * * *﻿
Posted by Dean Farris at 9:48 AM

Coming soon- The Collective - a stunning new construction edifice which is currently underway- just near the relatively new location of Kravet Naples, another of my preferred sources for interior design projects.  Enjoy! DF ****


I've always enjoyed this Vincente Minnelli film, from 1965, starring Elizabeth Taylor and Richard Burton.  I totally relate to the character Ms. Taylor played- a rebel on the beach with a paint brush- living there in a shack with her young son... and, interestingly, the painting she is shown with (above) is by the beautiful wife of the late Tony Duquette, Elizabeth "Beegle" Duquette.

﻿ Here, you can see what an elegant woman Mrs. Duquette was- and so talented, just like her wildly creative husband.  They were at the pinnacle of Southern California society- and he was discovered by the iconic and famous decorator, Elsie de Wolfe, who lived in Beverly Hills in the winter...
I read with interest that the Duquettes loved to serve Mexican food at their fabulous dinner parties.  Imagine the fun they must have had!

Just look at this amazing painting by Elizabeth Duquette- a tour de force of mystical and mysterious magic- allegorical, and totally fabulous... I so admire her and her work, just as I admire my dear friend, Judith Auclair, and her amazing work with shelled objects- known as coquillage- their talent knows no limits, then and now.

Judith Auclair is also an elegant, talented woman- and a wonderful friend of many years.  Her taste level is through the roof- and she loves, like I do, to fantasize about schemes and decorative palettes, fabrics, furniture, gardens and architecture-  and for many years she has sold her shelled creations here by the seashore- and has her work included in prominent homes including the Jeffery Smith designed house here with interiors by David Anthony Easton of New York.  She is a dynamo, and, like Francis Elkins, prefers to be near the sea, the coast- and always surrounded by great beauty.

This past Easter Sunday, I had the pleasure of attending a casual but fun dinner on the beach- adjacent to the Ritz-Carlton- and took this snap shot, as the sun was setting.  While the sun was sinking into the horizon ever so slowly- our friend Norbert sang a most beautiful aria, in Italian of course- which was very beautiful and very soul enriching.  And I thought of dear Judith, Elizabeth, Beegle, and the beauty of our world.  DF ***** 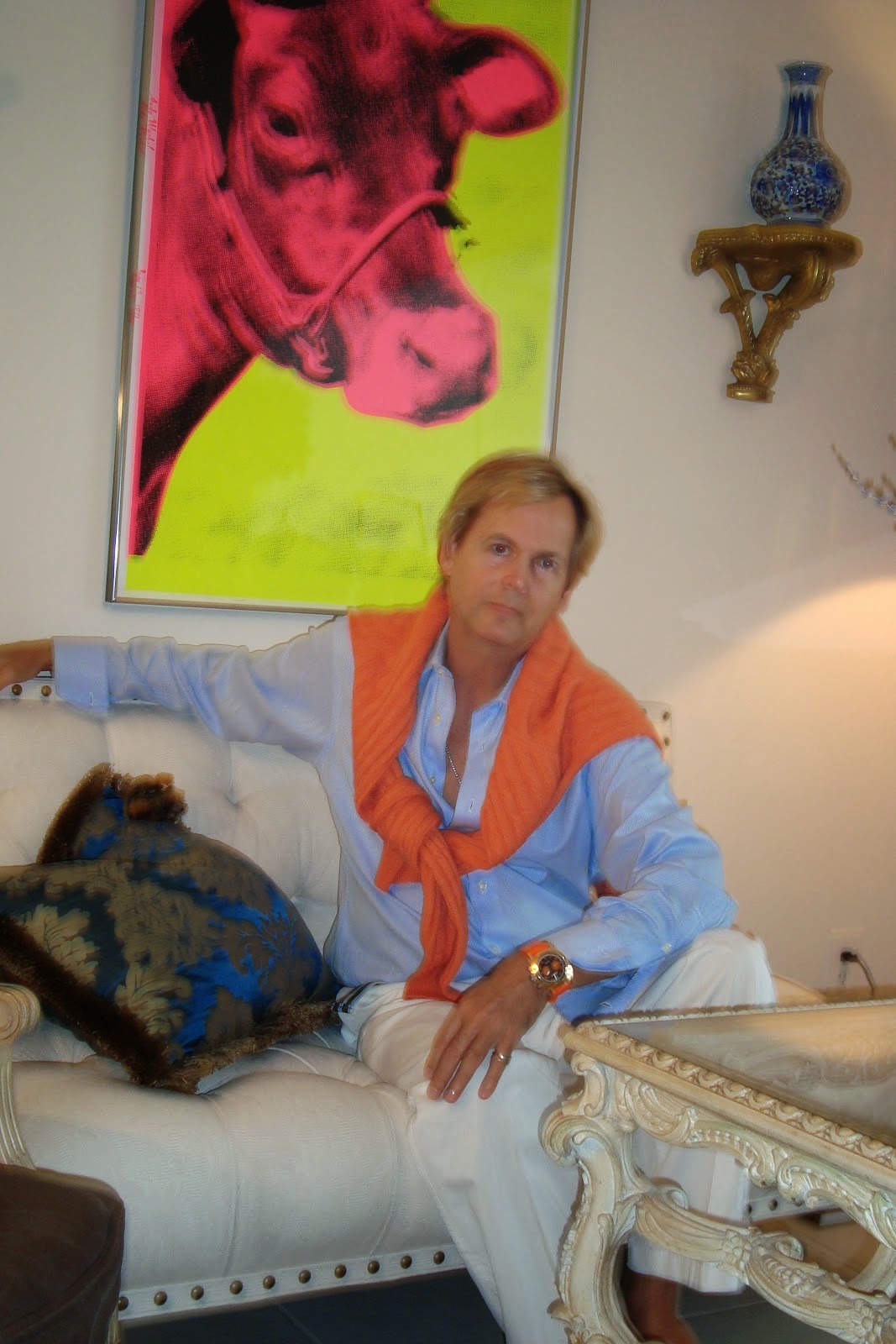