Room of the Week, Joe Nye 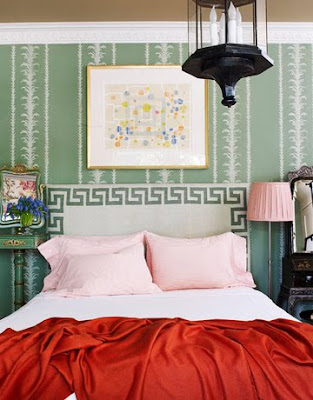 photo courtesy House Beautiful
I very much like this bedroom, which belongs to designer Joe Nye, in Los Angeles, and was featured in House Beautiful...also I got a mild kick out of seeing my old friend from New York, Arthur Dunnam, on the show "Selling New York" on HGTV last night. Arthur is the head designer at Jed Johnson, and was always very kind to me when I lived in the city. I also as you know have seen another old friend from New York, Peter Dunham, on the new show called "Million Dollar Decorator" on Bravo. Peter lives in Los Angeles and is a decorator with his own line of fabrics. It seems that every magazine I open and every show I see on television is now featuring people I know from my New York days...very exciting! Have a great day dear readers. DF *****
Posted by Dean Farris at 5:12 AM